Spanish for Speakers of Other Languages 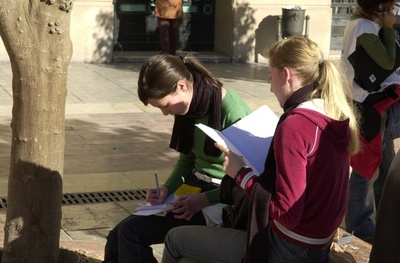 The University of Malaga has been running the course in Spanish for Speakers of Other Languages since 1947, so as to spread Spanish language in accordance with the quality standards of Higher Education.

Our programmes cater to new technologies and innovative teaching methods specific to our field, in line with Andalucía Tech Campus of International Excellence project, in which our university is involved.

Since 2011 our courses are run at the recently launched centre located in El Palo (in Malaga city), Marbella, and La Cala de Mijas. We thus improve our service by making these courses available to a wider range of speakers of other languages currently residing in the Costa del Sol, who wish to improve their communicative competence in Spanish.

Likewise, the I Málaga-Madrid Course in Spanish, a joint initiative led by the University of Malaga and the Madrid Complutense University, will allow those who love travelling to experience Spanish lifestyle first-hand in both cities.

THE COURSES ATTRACT STUDENTS FROM THE FIVE CONTINENTS

In the academic year 2012-2013 a total of 2,315 students of 70 different nationalities took the Spanish for Speakers of Other Languages courses organized by the University of Malaga; an example of the success of these programs.

As shown in the above tables, the highest numbers of students are, in this order, American, German, Chinese, South Korean and Italian.

Although the aforementioned nationalities have been most numerous in the past five years, remarkable changes have occurred. For instance, the rise in the number of Korean has been striking. In 2008 the course saw only 15 Koreans enrolled; this figure rose to 35 in 2009, 58 in 2010 and 206 in 2011-2012. Therefore, in four years the number of South Korean students has increased by fourteen fold.

The course also receives many students from France, Poland, Japan and Britain.

The chart below shows the origin by continents of students enrolled during 2012-2013 academic year: