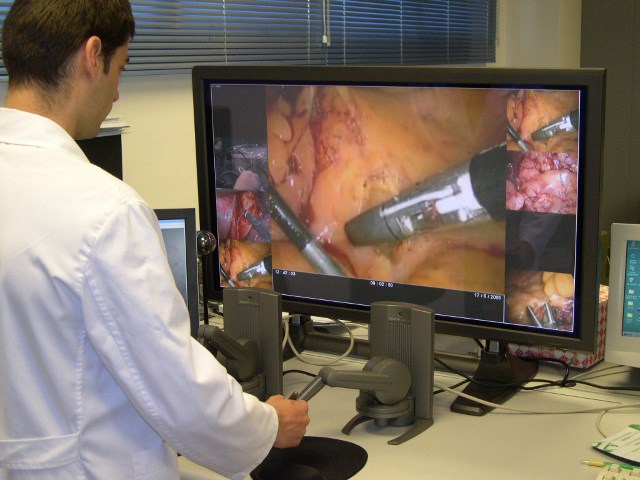 The aim of this project is defined as the continuation of the works carried out by this team of researchers on the framework of the previous financial aid given by the Health Research Fund (Project coordinated with record numbers 00/0050-01 and 00/0050-02).

It details, particularly, the creation of a specific robot arm specialized in handling the camera during laparoscopic surgery operations. The main feature will be the perfect adaptation to the spatial conditions of the operating room and the no need of any kind of running installation. It will be managed under voice control, via a wireless communication network, using an additional system placed at the laparoscopic column. A series of advanced features for the telemedicine will be added: a remote surgeon positioned in a distant site will be able to carry out tasks of telesurgery, telediagnosis or to act as a telementor. Likewise, it expects to continue the research on telemanipulation and apply it to both the laparoscopic surgery and the transurethral resection of the prostate.

1. Improvement of the robotic system to allow it to be used in human surgery

This work starts from the experience obtained in the previous FIS project for constructing a more accurate mechanical system for the robotic arm, and a motion control electronic system which is included in the machine. This will be performed in order to fulfil the current regulation for electro-medical machines.

2. System for telediagnosis and telesurgery.

It is expected to create an autonomous device placed at the laparoscopic column and web connected in order to provide a communication system and to share textual and visual information between a local surgeon present at the operating room and a remote surgeon. It will be able to be used without the robotic arm in routine procedures only for teleconsultation tasks and cooperative diagnosis. The arm will be communicated via radio if it is in the operating room, and the remote surgeon will be able to telecontrol it.

3. Robotic arm for telemanipulation in laparoscopic intervention and for the transurethral resection of the prostate.

It details the design of a specific tool for all the interventions enumerated above: one for carrying laparoscopic forceps and other for activating a resector used in urological techniques. An adapted industrial robotic arm will be able to teleoperate through the same human-machine interface based on a master arm. Particular emphasis will be placed on safety conditions in such a way that the working area will be limited and sudden movements will not be allowed.