The EDANYA Group of the University of Malaga has been nominated as one of the four finalists for NVIDIA’s 2018 Global Impact Award, which provides $200,000 to researchers using NVIDIA technology for groundbreaking work that addresses social, humanitarian and environmental problems.

The work nominated for this prestigious award consists in a combination of an in-house developed software, Tsunami-HySEA, and NVIDIA newest GPU technology to be used in Tsunami Early Warning Systems (TEWS). The proposed solution is already used in the National Tsunami Warning Centers (NTWC) in Italy (INGV) and Spain (IGN), at the Joint Reserch Center (JRC) of the European Commission, PMEL/NOAA and will be soon implemented at the Chilean NTWC at SHOA (the Hidrographic and Oceanographic Service of the Chilean Army). UMA's contribution will have a positive humanitarian impact in preventing the impact of tsunamis around the world.

This achievement has placed EDANYA Group researchers among four finalists for NVIDIA’s 2018 Global Impact Award. The award provides an annual grant of $200,000 for groundbreaking work that addresses the world’s most important social and humanitarian problems. The 2018 awards will go to researchers or institutions using NVIDIA technology to achieve breakthrough results with broad impact.

The winner of the 2018 Global Impact Award will be announced at the GPU Technology Conference, March 26-29, in Silicon Valley. 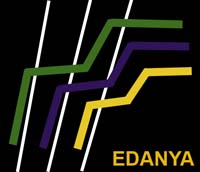