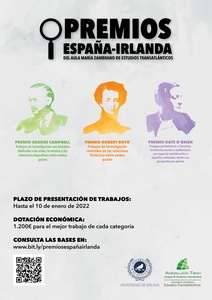 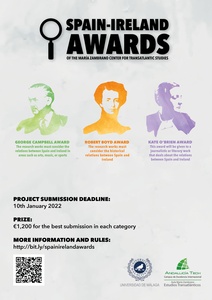 The María Zambrano Center for Transatlantic Studies at the University of Malaga (AMZET) advocates for the continuous promotion of research regarding the relations between Spain and Ireland. For this purpose, it has announced the Spain-Ireland Awards that include three categories in different areas: The George Campbell Award, the Kate O’Brien Award, and the Robert Boyd Award.

These awards are sponsored by José Antonio Sierra Lumbreras. Each of the categories carries a prize of €1,200 for the winner.

Rules of the award