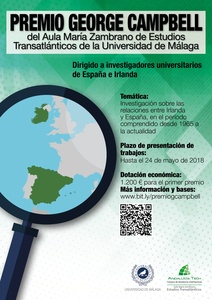 George Campbell Award of Aula María Zambrano of Transatlantic Studies of the University of Malaga promotes the investigation about the relationship between Spain and Ireland. This Prize is aimed to researchers associated to Spanish or Irish universities and the investigations should focus on relations in any field (historical, cultural, political, social, economic, etc.) between both countries during the period since 1965 and nowadays.

The financial envelop will be 1.200€ to the first prize, and accesit to the second best. The Prize bases will soon be public on the Aula María Zambrano Transatlantic Studies web site www.uma.es/amzet. The period of participation will start the day that the bases are published and it will extend six months.

The Award is named after George Campbell, who was an important Irish artist. The painter was born in Arklow, Ireland. He made Malaga his second homeland, where he spent more than six months every year.