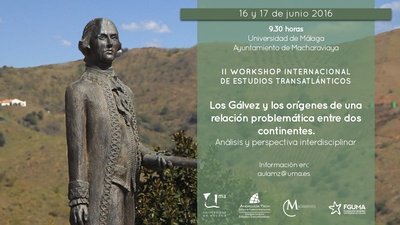 "The Gálvez and The Origin of a Problematic Relationship between Two Continents. Analysis and Interdisciplinary Perspective"

The aim of this scientific meeting —in which prestigious researchers and experts from both national and international universities take part— is to update the knowledge about the relationship between Spain and America nowadays and the influence that the recovery of the figures of the Gálvez family, who played a major role the last years of XVIII century, has on them.

An element present in this edition is the Spanish support to the independence of the thirteen colonies, later known as United States of America.The analysis of the consequences of the American Revolutionary War plays a major role in this gathering: the culprits and the consequences on the relationships between Spain and America throughout the two centuries that has passed.

Experts from Mexico, EEUU and Spain will make use of 15 – 20 minutes of exposition to make a reflection about any distinctive aspect of the figure of Bernardo de Gálvez and/or his family, his participation in the American Revolutionary War as well as the American and Spanish historic context of that time. After every thematic block, a debate and an exchange of views will be opened.

The event is open to everyone interested in the relations that take place between the two sides of the Atlantic.

Program of the 2nd Workshop (Spanish)

Report on the 2nd Workshop (Spanish)